Starting with application year 2022-2023, Navy ROTC and Navy ROTC-Marine Corps Option have replaced the sit-up (also called a curl-up) with the plank for their fitness tests.

Candidates no longer have the option to perform sit-ups as part of their fitness test.

The reason for this move is that the plank has been shown to be a safer exercise than curl-ups. Curl-ups, or sit-ups, which have been part the fitness test since the 1980s, can reaggravate lower-back injuries. On the other hand, the plank helps build muscles to prevent injury.

The following is a graphic from the Navy showing the correct plank form: 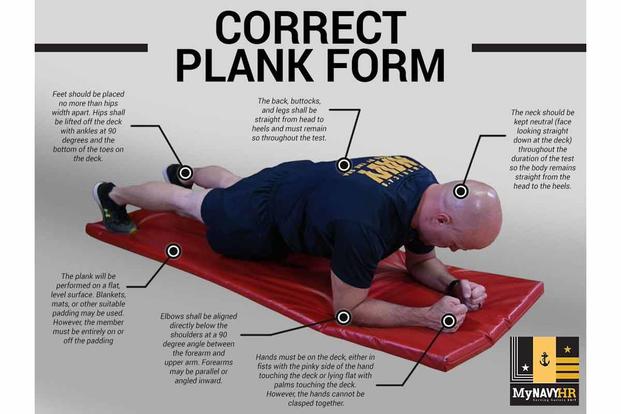 NROTC Applicant Fitness Assessment (AFA) is the test of record for the Navy ROTC scholarship. It consists of planking, two minutes of push-ups, and a 1-mile run. It is conducted by a high school official such as a gym teacher or coach.

The test is subjectively worth approximately 5% of the overall criteria for awarding a scholarship.

Read our article on the Navy ROTC Applicant Fitness Assessment to learn how the Navy scores the plank.

The Marine Corps Physical Fitness Test is the standard for this scholarship the main determining factor whether a candidate wins a scholarship. Candidates will perform “dead-hang” pull-ups to exhaustion, plank to exhaustion, and a three-mile run. The test is normally given at a local Marine Corps recruiting station when applicants are initially processed for the scholarship.  Candidates can retake the test in order to improve their score during the application period which runs from April to February.

For Male scholarship awardees, the average PFT score was 270. For Females, it was 262.

The plank is scored out of 100 points.  The scoring is the same for males and females. Read our article on ROTC fitness tests to learn how the Marine Corps scores the plank.

Navy ROTC will continue assessing data once candidates are performing the new test events to make sure the scores are reflective of an average person’s performance.

We wish you the best of luck as you take your Navy ROTC or Navy ROTC-Marine Corps option fitness test.