As of March 24, 2022, there will be two tests that Army ROTC cadets will need to take during their time as cadets:  The Cadet Command Fitness Assessment (CCFA) and the Army Combat Fitness Test (ACFT).

The CCFA is the same test administered to high school scholarship applicants consisting of 1 minute of pushups, 1 minute of sit-ups, and a 1-mile run.   This test will only be used to establish minimum fitness standards to contract cadets into the program.  The following table shows the minimum passing scores to allow cadets to sign contracts:

Once a cadet contracts, the ACFT becomes the test of record.   This test will be used to evaluate cadets and in the compilation of the individual order of merit.

The ACFT consistes of these six exercises:

We recommend the Army’s ACFT page for the best visual overview of the test and to learn how to prepare.

The following is the chart showing the minimum and maximum points based on age and gender: 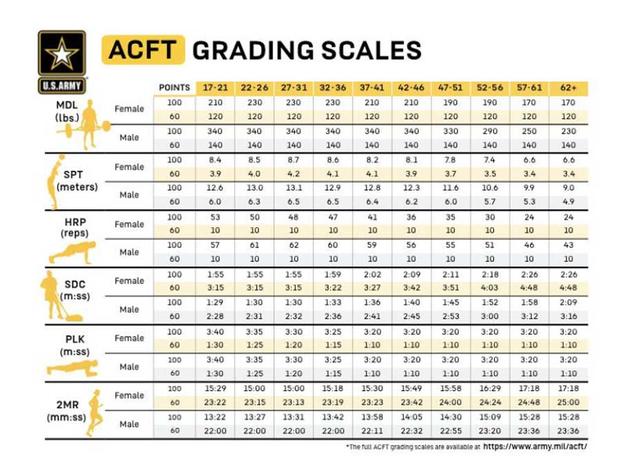 Our Recommendations for Army ROTC Fitness

Continue to practice the CCFA exercises to pass them and sign your ROTC scholarship contract.

Start practicing the six-event ACFT so when you arrive on campus, you are prepared to excel and stand out from your peers.

Stu Smith, a former Navy SEAL, and certified personal trainer, has a twelve-week plan to excel at the ACFT which you can purchase here.  His book also prepares you for longer ruck marches which are part of Army ROTC.

We wish you the best of luck as you begin your journey in the fall as an Army ROTC cadet!

Want to maximize your potential of earning an Army ROTC Scholarship?

About the Author: LTC Robert Kirkland

Lieutenant Colonel Robert Kirkland (USA, Ret.) is an expert on military admissions and leadership. He served for over 25 years in the United States Army, including stints as an instructor at West Point and as a commander of two Army ROTC programs. He has helped students win ROTC scholarships for 8 years.